RIDDLES AND SECRETS XX OF THE CENTURY

- one of the most known cases in history of UFO, it is possible even to tell, that it is the real basic point of ufology as sciences. And it is known for that, according to some certificates, right at the beginning of July, 1947 near the cities of Roswells (state of New Mexico), the rests wrecked inoplanetnogo a spacecraft have been ostensibly found, and also bodies of members of its crew. 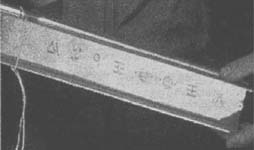 In the Evening on July, 2nd, 1947 some people saw above Roswell strange object in the form of a disk which very quickly flied in a northeast direction. Next day, approximately in 75 miles from Roswell, according to the data subsequently promulgated by ufologists, the fragments scattered on the big area, apparently, this flying object have been found out. Under the certificate of one of direct participants of wreck, farmer William Brejzela, fragments partially consisted of a material had similarity to a heavy-duty and superflexible foil on which does not remain any traces even from impacts by a sledge hammer, and also easy beams with the signs put on them reminding hieroglyphs have been found. The militarians who have arrived to a place of accident literally on next day, have quickly collected these fragments and have sent them in Right-Oeea (nowadays - base of the Air Forces of the USA Right-Iaooa?nii), state of Ohio, for studying. At press conference to journalists have told, that it were fragments of a balloon on which the radar from a foil has been established. Except for that it was informed on other wreck nearby to Roswell where the basic part of the case of the metal ship and a body of members of its crew has been found. Essences, under descriptions, had round heads, small eyes, the bodies, deprived hair. Their leather was yellow or orange color and had scaly structure, similarly to a leather of reptiles. The sizes of a head in relation to a body were much more, than at people. The clothes of essences represented an integral overalls of grey color, without any lightnings, buttons or belts.

Firstly " Roswell incident " has not received a due resonance in press as militarians have carefully coded everything connected with this business, and journalists began to be exposed to powerful influence (including threats and blackmail) from the government. In the environment of ufologists there is a belief, that at the governmental level the so-called group MAJESTIC-12 consisting of experts of the high rank was engaged in studying Rozuellskogo of "wreck", but this belief leans on the document which authenticity is doubtful. And nevertheless " Rozuelsky incident " is accepted by ufologists not as the theory, and as the fact which is not a subject any doubt and on which the body of demonstrative base of all ufology is based.

Materials on a theme also are HERE:

CIRCLES ON FIELDS: NEWCOMERS HAVE A REST. THE NEW VERSION

THE UFO HAVE HELPED AMERICANS TO CREATE THE SUPERWEAPON

A LITTLE THE PURE SCIENCE

RIDDLES AND SECRETS XX OF THE CENTURY